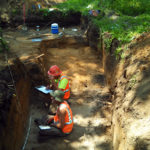 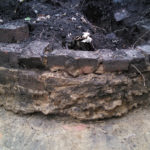 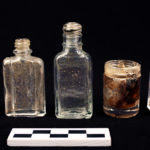 Corn Island Archaeology is in the process of completing a series of archaeological investigations and cultural-historic surveys/mitigation for a proposed retention basin and green space in western Jefferson County, Kentucky. The work was begun in 2011 and will continue to the end of 2017. The area of potential effects (APE) encompassed an 11.96-acre tract of land along Maple Street between 20th Street and 24th Street in the California neighborhood of Louisville. The APE consisted of 128 lots distributed over eight city blocks. The investigation is being completed in support of the Metropolitan Sewer District (MSD) and is necessary in order to comply with regulatory conditions of the U.S Army Corps of Engineers (USACE), Louisville District. MSD is proposing to install a new storm retention basin in an area suffering from ponding and local flooding during significant rainfalls

As a result of the fieldwork, eight sites were recognized, which consisted of over 20 features and 20,000 artifacts. The 19 lots were chosen to gain a broad understanding of the area’s development, demographics, wealth, and lifeways among other topics that might illuminate the transition of a Louisville working class neighborhood from the Victorian Era into the twentieth century. Significant amounts of data were recovered from nearly every lot and those chosen for study contributed to a clearer picture of changes to Louisville’s urban mosaic.