In accordance with the new Covid-19 Mandates issued by the governor, please be aware our office will be closed until December 13th. Phone calls to the office may not be answered in a timely manner!

In the meantime if you need to speak with us, please instead call 502-592-2355 to get in touch with Anne Bader. You may also email her at abader@ciarch.com. We are still dedicated and moving forward with current projects working from home and continuing with field work.

Thank you for your patience!

Corn Island archaeologists utilize photogrammetry, a technique for calculating the relationship
between multiple overlapping photographs to derive precise 3D measurements. For
archaeologists, photogrammetry is a useful tool for measuring any number of items from small
handheld artifacts to entire archaeological sites.
Photogrammetry is a type of remote sensing technique and is just one of several methods for
detecting and deriving information from afar. Remote sensing can assist in measuring difficult
to access features, including those below ground, or tall objects in the field that otherwise
cannot be safely accessed. With the availability of today’s digital cameras and unmanned aerial
systems platforms, modern photogrammetry equipment is more accessible making survey
easier and more flexible than in the past. In fact, remote sensing techniques have been in use
for over a century dating back to the practice of attaching cameras to balloons for aerial
observation during the U.S. Civil War. The earliest uses of photogrammetry came shortly after
in the early 20 th century when aerial photographs were collected and viewed in stereo pairs to
interpret relief aiding in the development of topographic maps.
Aside from deriving precise measurements, photogrammetry is increasingly used from digital
curation of individual artifacts to aiding in high-resolution site interpretation in GIS software.
Fragile artifacts can be shared digitally as a 3D model presenting a more tangible sense of the
item’s attributes and geometry when compared to standard photographs. Historic structures
that are in disrepair or slated for modification can be recorded in situ to fully document
integrity and complex site context. Spatially referenced images of landscapes can be
orthorectified in photogrammetry software when collected using ground control points (GCPs)
and utilized as datasets in GIS providing a basis for additional analysis. 3D point clouds and
polygonal mesh models are common products derived from photogrammetric model
development.
Corn Island recently used photogrammetry to document and measure a historic bridge
abutment in Spencer County, KY.

The offices of Corn Island Archaeology LLC are closed indefinitely during the current pandemic crisis. Our staff are working remotely from their homes. If you need to reach us, please do not call or leave a message at our office number. You can email Anne Bader at abader@ciarch.com or call her at (502) 592-2355. You can likewise call or email the project manager that you are currently working with. Don’t hesitate to reach out if there is a need. We will be checking our email regularly. We are continuously evaluating the appropriate level of social distancing in relation to fieldwork and travel to be sure we are following the latest guidance. We are doing our best to keep everyone’s projects moving forward in this difficult time.

KAS teams up with Bridging Kentucky

Corn Island Archaeology and the Kentucky Archaeological Survey (KAS) from Western Kentucky University have teamed up to evaluate an archaeological site in southern Kentucky. This site is located in the project area of a proposed bridge reconstruction project in the statewide Bridging Kentucky Project. Materials from various cultural periods are being revealed at this site.

Recently, we were visited by WFPL’s Laura Ellis to record a podcast on our ongoing investigations of Beecher Terrance. We discussed the history of the area, our process during the excavations, and much more. Thank you so much for coming out! Listen to the full podcast on Here Today: Diggin’ on Beecher Terrace 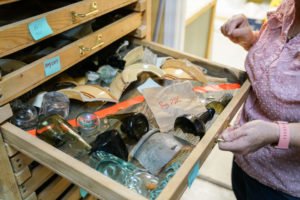 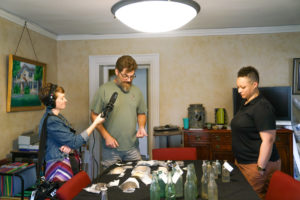 We’ve been to some very interesting places all across the state thanks to the Bridging Kentucky! Started by the Kentucky Transportation Department, this initiative aims to rehabilitate, repair, or replace more than 1,000 bridges across the state. We’ve been doing our part as one of the teams assessing many of these structures. The following are a few that we’ve reviewed recently in District 5.

Beecher Terrace project featured in this month’s Louisville Magazine. Tossed and Found covers some of the history and artifacts that we’ve uncovered at the ongoing Beecher Terrace site in downtown Louisville. Read the Full article here.

Our archaeologists and staff were also interviewed for Louisville Metro TV recently, also on the Beecher Terrance site. Watch the Story Here.

Corn Island has recently finished preparing a educational display for Riverport. We gathered early artifacts and researched residents to give an informative look at the life of early settlers from the area. This display is currently available for viewing at select locations on a rotating basis. Please see the schedule below to find out more.

Meet David Schatz. Dave heads up our urban archaeology program and gets excited about digging around old neighborhoods in Louisville. Dave holds an MA from the University of Louisville and has years of practical experience that allows him to devise effective and scientifically defendable ways of investigating deeply buried urban features.

Last year, Corn Island excavated the site of Marriott AC Hotel Downtown. The hotel had its grand opening just before Derby, and has placed some of the artifacts uncovered on display in their lobby. The 1.07 acre lot excavation revealed 13 features including a basement, three cistern, and nine privies. Five of those privies were sampled. The recovered artifacts are varied and in good condition and provided a good deal of information about the inhabitants of this block from 1860s into the 1900s. In addition, other features, notably cisterns, were exposed and documented, revealing information about construction techniques as well as placement on the residential lots.

A large variety of glass bottles were also recovered, including ones from Falls City Brewing and all manner of medicinal bottles and vials.

A large amount of glass marbles and children’s toys and dishes were found at the site.

Excavated stoneware jugs displayed along with some modern decor.