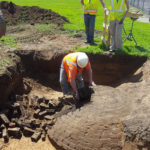 Corn Island Archaeology LLC was tasked with completing Phase I and Phase II archaeological investigations at the Beecher Terrace Housing Complex in downtown Louisville in support of the Louisville Metro Housing Authority. These investigations were required prior to the planned demolition of the existing housing complex and construction of new housing. The Beecher Terrace Housing Complex is a 12-block facility that lies on 39 acres (16 hectares) between Ninth and Thirteenth Streets and West Jefferson Street and Muhammad Ali Boulevard in downtown Louisville.

The archeological project began in January 2017. To date, four areas within the project APE have been investigated by backhoe trenching with feature excavation. The four areas were selected because they were in open areas with no standing buildings. One of these areas was a historic cemetery and current-day park which was examined to determine if human burials were still present at the location.

Sixteen backhoe trenches resulted in the discovery of 74 features. Eight of these were excavated. The eight features that were excavated included four privies, two cisterns, a brick cellar, and a builder’s trench. Twenty-five of the features were grave shafts in Baxter Square Park/cemetery.

Two archaeological sites were recorded with the OSA. Most of the 12-block APE is contained within a single archaeological site designated 15JF923. Site 15JF923 contains numerous buried cultural features including privies, cisterns, and foundations related to the late (possibly mid) nineteenth century occupation of the property.

Baxter Square Park, the first public burial ground of Louisville, was assigned site number 15JF924. Site 15JF924 contains intact human interments. While some of the burials may have been relocated to nearby Jefferson Street Cemetery, fieldwork revealed 25 grave shafts, only one of which appears to have been relocated. Site 15JF924, coincidental with Baxter Square Park, is furthermore believed to be the first public burial ground for the City of Louisville, beginning in 1782 and closing in 1832. It is often referred to as the Pioneer Cemetery, or Old City Cemetery.

Both sites were recommended as eligible for listing in the National Register of Historic Places. Site 15JF924 will be avoided by construction. Because impacts to site 15JF923 cannot be avoided, additional investigation is recommended in the form of data recovery.