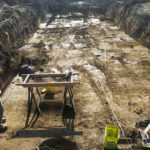 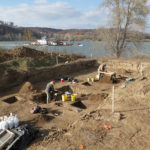 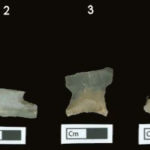 In 2014, Corn Island Archaeology completed a Phase III archaeological mitigation of a previously recorded and evaluated site, 15HA34, in connection with planned construction in Hancock County, Kentucky. The investigation was requested to fulfill and satisfy the necessary compliance requirements regarding Section 106 of the National Historic Preservation Act of 1966.

Earlier, in 2013, a Phase II field investigation of 15HA34 revealed a distinctive dark cultural sheet midden was identified that contained Late Archaic diagnostic materials (e.g. Merom Cluster projectile points). Below this Late Archaic stratum, a Middle Archaic cultural stratum was identified based on diagnostic artifacts including side-notched projectile points and a bannerstone. As a result of this investigation, site 15HA34 was recommended for Phase III archaeological evaluation.

The Phase III investigation was done using a combination of backhoe stripping, excavation of ten 1-X-1 m test units, and bucket auger excavations. As a result of the field investigation, 11 features were identified and excavated. The Late Archaic midden was confirmed across the site and observed to extend outside the project APE in all cardinal directions. The Middle Archaic cultural stratum was found to vary with depth in relation to the Late Archaic. A variety of diagnostic artifacts were identified in both cultural strata supporting the Late and Middle Archaic temporal divisions of the two strata.
Based on the quantity of floral and faunal material recovered during the Phase II investigation, it was proposed that the Phase III investigations of site 15HA34 would best contribute to the specified objectives of the Kentucky State Plan by undertaking a recovery method focused on the retrieval and documentation of floral and faunal materials utilized and exploited during the Middle and Late Archaic period. Despite these expectations, relatively minor amounts of faunal and floral material were recovered. In light of these findings, an in-depth analysis of the organization of lithic technology was undertaken.

Diagnostic materials were consisted with the Phase III investigations. Radiocarbon dates obtained from both cultural components place the Late Archaic component within the Riverton Phase and the Middle Archaic within the Big Sandy II phase as defined in the Ohio Valley. Nine Late Archaic and three Middle Archaic features were identified and excavated. These consisted of thermal hearths and refuse pits, most exhibiting in situ burning containing debitage, nut and wood charcoal, and bone flecks. No architectural features were identified. The lithic analysis revealed that for most materials the entire range of bifacial tool production was evident, but that the emphasis on particular stages of reduction and use varied by material type and by temporal period. Overall the pattern of chert exploitation and tool production during both temporal periods appears to be one which is characterized by an increasing shift from a residential foraging pattern towards a logistically organized residential mobility pattern.