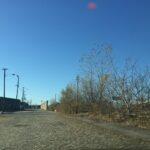 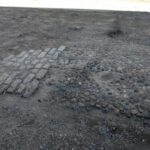 In March 2018, Corn Island Archaeology LLC was engaged by Hazen and Sawyer to support the Louisville and Jefferson County Metropolitan Sewer District as part of its Downtown Combined Sewer Overflow Interceptor project. In response to a Memorandum of Agreement, Corn Island completed cultural historic documentation and conducted archaeological monitoring during construction of a sewer line through Rowan Street at the intersection with 11th Street. This report summarizes Corn Island’s findings at the 0.08-hectare, or 0.2-acre, project site at Rowan and 11th streets. The work extended along the southern side of Rowan Street from a pump station at the southwestern corner of Rowan and 10th streets to a diagonal crossing just east of the intersection of Rowan and 11th. The total area excavated covered 0.08 hectare, or 0.2 acre.

The cultural historic documentation included several required elements. The first was to complete or update a Kentucky Heritage Council site form for Rowan Street and acquire a Kentucky Heritage Council site number. It was learned that this resource already had a site number (JFL-502), so the site form was updated during this documentation, and the resource was updated to include the blocks between 11th and 13th streets. In addition, the documentation must include a map of Area 1 of the Downtown Combined Sewer Overflow Interceptor project. A historic context was also prepared along with a statement of eligibility for the resource. It was recommended that the block of Rowan Street between 10th and 11th is individually eligible for listing in the National Register of Historic Places as it retains sufficient integrity despite the impacts from the sewer line extension. However, the section of the resource between 11th and 13th streets is recommended as ineligible due to a lack of integrity. Finally, the documentation must include the findings and a schematic profile of the roadbed as seen in the archaeological monitoring, discussed below.
The Metropolitan Sewer District required archaeological monitoring to determine whether archaeological or historic resources existed within the project area of potential effect. Monitoring revealed that the project area had once been a naturally sloped terrace edge along the river that was subsequently leveled with fill. The historic roadbed was constructed on top of this fill. An earlier macadamized road surface, which was found to be part of this profile, proved older than the street’s granite bowlder block surface, which dated to the late 1800s (a feature of historic interest in that it may indicate early efforts at paving the intersection). However, no features or below-ground resources eligible for listing in the National Register of Historic Places were found.