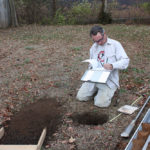 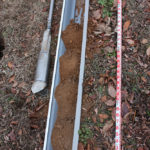 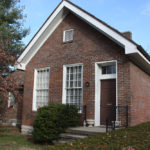 A Phase I archaeological survey of approximately 1.6 ac located in Danville, Boyle County, Kentucky was conducted by CIA in December of 2008. The investigation occurred in an urban setting in downtown Danville on a property immediately adjacent to the Constitution Square Historic District. The archaeological investigation was accomplished by pedestrian walkover, shovel probing, and limited augering. The fieldwork resulted in the discovery of cultural deposits across three quarters of the project APE. One archaeological site, 15BO104, was documented, although the site may encompass archaeological remains from several periods of historic occupation. The site appears to contain intact undisturbed cultural deposits within an organic midden that date at least to a post-war 1870s freed black urban community along Walnut Street and possibly to an early nineteenth occupation along the former First Street associated with historic Constitution Square.

No structural remains or features associated with any primary structures (residences and businesses) were identified in the project area. The earlier structures along the former First Street date from the 1790s, many of which are extant today. These lie outside the project APE. In addition, the 1984 construction of the apartment complex, including paved parking lots and driveways, were built over the locations of the former late nineteenth century buildings along Walnut Street. However, the rear yards of these structures lie within the project APE and undisturbed areas coincide with the locations of historic outbuildings, notably a stable and a smokehouse.

The NRHP eligibility of site 15BO104 could not be determined as a result of the Phase I survey. The presence of intact cultural deposits potentially related to the early through late nineteenth century (as well as early twentieth century) occupation of the area was confirmed. The potential for encountering privies or the remains of outbuildings is considered moderate to high. It is recommended the site be avoided by project construction or subjected to Phase II archeological evaluation.

In addition to the archaeological remains, the Urban Renewal program is gaining significance as a historic program; the urban renewal project in Danville represents an early HUD project. Because of this, an architectural assessment of the existing apartment complex was undertaken. As these structures were built in 1984 and have little historic or architectural significance, they were not considered eligible for listing to the NRHP.