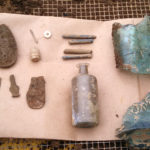 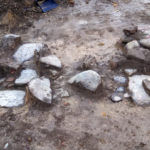 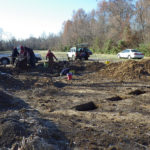 Between November 14, 2014 and December 16 of 2014, Corn Island Archaeology LLC of Louisville, Kentucky conducted Phase II archaeological evaluations at sites 15JF861 and 15JF862 in southwestern Jefferson County, Kentucky. The two sites were discovered earlier that year during a Phase I survey of a 165-acre parcel slated for development by the Louisville and Jefferson County Riverport Authority as an industrial park.

Site 15JF861 is a multicomponent site dating to the mid-nineteenth century and to an unknown prehistoric period. Excavation of ten test units and mechanical removal of the plowzone revealed a total of 24 historic features including structural remnants, pits, midden, and posts. Of the 24 features, 21 were sampled. The Phase II excavations recovered 5,607 artifacts including Activities, Architecture, Clothing, Furnishings, Kitchen, and Personal Group items. Numerous ceramics exhibiting early nineteenth century decoration types such dipped ware and early ware types such as pearlware were recovered. Coins dating from this period were also recovered. Artifact analyses indicate the site dates to between 1820 and 1860.

Site 15JF862 dates to the mid- to late nineteenth century with a very minor prehistoric component. Phase II investigation of the site included excavation of ten test units and mechanical removal of the plowzone to expose potential features. In total, 67 historic features were uncovered including 23 post/piers, 7 pits, a chimney base, and 26 historic posts. Twelve features were sampled during the Phase II investigations. A total of 3,959 artifacts were recovered, including coal, slate, marbles, buttons, nails, window glass and ceramics. Initial artifact analyses indicate the site dates to between 1850 and 1890.

While both sites meet the Criterion for NRHP eligibility under Criterion D and should be considered eligible, it is believed that additional excavations at the sites will only produce duplicate data. The quantity and variety of both the features explored and the artifacts recovered as part of the Phase II investigation provide ample data for archaeological interpretation and should adequately mitigate the destruction of the sites when the Riverport Phase V project proceeds.

Mitigation measures, which included those for the demolition of two NRHP-eligible buildings, included preparation of two historic contexts (presented under separate cover), one for farming and the other African American lifeways in southwestern Jefferson County. In addition, mitigation was to include public education such as preparation of a display to be placed at the new Southwest Jefferson Public Library and other venues that would include information and artifacts recovered during these investigations.